Our family’s two Corvettes are like siblings, clearly sharing common DNA but truly unique in personality. Each is a true investment, providing a positive rate-of-return, but with very different approaches and measures of value. 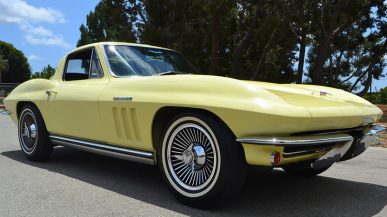 These Corvettes were born about 18 months apart, the yellow coupe in late 1964, the blue roadster in mid 1966 – about the right spacing for two close siblings. The roadster has been in our family since 1979 when it was rescued from a field. It had been abandoned by its second owner, who purchased it from his sister; neither was a true car enthusiast.

The yellow coupe is a more recent addition, finding its way out of long term care with its second owner – a noted car collector.

The yellow older brother is more disciplined, meeting the common expectations and conforming to the norms of first sons. The younger sibling, as in life, needed to find its own place. It survived a less entitled life, it experimented and developed, always striving to excel. Yes, the family resemblance is clear, but the differences in life experiences are telling.

The yellow 1965 coupe remains much the same as when it left the assembly line on November 8, 1964; the first day of production after the union strike at the St. Louis Corvette assembly plant. It was a relatively high option car; fuelie, 4-speed, teak steering wheel, telescoping steering column and power windows. All major components are original and those that have been replaced in the past half-century are largely OEM or correct reproduction parts down to the AC N-44 spark plugs. 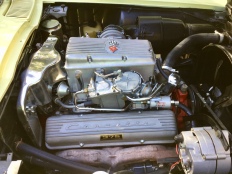 Not so with the blue 1966 roadster. Yes, the body, engine, transmission and differential are original, but there are many modifications. The period correct wheels and modern, larger radial tires are the most obvious changes. A look under the hood reveals a modified engine – no longer the base 300 horsepower 327. While the block is original, the cam, intake manifold, carburetor and heads are all modified, being much more like the optional 350 horsepower engine offered that year.

“Which is better?”, you may ask. This is where the debate begins.

To the purist, there is no debate. The original, numbers matching fuelie coupe wins! It is a rare car – the last and most highly developed of the mechanical fuel injected 327s in the second rarest color with low miles. It is the clearly the best. Less than half of the 1965 Corvettes were coupes and only 771 had the L84 fuel injected engine.

Once its originality and condition are certified, its value will soar, potentially providing a positive financial reward.

“Not so fast!” Another contingent of enthusiasts argue. “Corvettes were made to drive! They were designed to go fast down curvy roads, connecting the driver in a way that few cars emulate. Why would we let a half-century’s development go untapped?.”

Yes, it is true, the modified 1966 roadster drives better. Perhaps the engine does not connect with a true gearhead the way the solid-lifter fuelie does, but it is powerful and responsive. Its 3.36 rear end keeps the revs in check during normal driving and provides a bit better gas mileage, while the much newer double-pump Holley carburetor is more tolerant of today’s ethanol laced fuel.

On the road, the ride of both is excellent, but the modern suspension and tires give the roadster a clear handling advantage. Both are extremely handsome. The coupe has the classic and unique “stingray” shape,

while the roadster with its matching hardtop is both more versatile and popular.

So, which is the better investment? No doubt the yellow coupe has a financial advantage, but what about those attributes more aligned to gearheads? Gearheads seek an emotional connection – that is provided by both cars. They seek performance and appreciation from other gearheads. Again, both cars meet that desire.

In our case, there is one more important factor. While both cars are adopted, the roadster has a long history in our family. It was resurrected from the barnyard by a father and son.

Later, a second son joined in its renewal. Our gearhead minds collaborated to improve performance while retaining its DNA. It continues to be nurtured by a father and son today, but now adding a third generation.  It promises to be in the family for another forty years, perhaps experiencing further evolution while respecting its heritage.

Will the yellow coupe achieve this family position? Time will tell.

There are many ways to measure the value of an investment. For gearheads, it is a matter of the heart, mind and soul. In the end, we decide on the value in terms of performance, emotional connection, enjoyment, and family bonds. Financial gain may be desirable, but most gearheads are rich in ways expressed by passion not retirement accounts.

Bryce believes that being a Gearhead is in our genes. His father was restoring antique John Deere tractors while in his late 80’s. His wife of 50 years, Karen, raced go-carts as a teenager and his two son’s, both certified gearheads, are also editors of alphagearhead.com. Bryce has owned over 60 vehicles, beginning with a MGA and currently nurturing six cars with a multitude of stories that will unfold in future articles at alphagearhead.com. His quest for knowledge and its application are reflected by his advanced degrees in engineering and business. He co-authored the book “Unleashing The Power Of Pervasive Leadership” (available at Amazon.com) and is currently writing “What Real Leaders Do” and “Psalms Of A Common Man”. “Delight yourself in the Lord, and he will give you the desires of your heart. Commit your way to the Lord; trust in him, and he will act.” Psalm 37:4-5 - ESV View all posts by Bryce Shriver

2 thoughts on “Investing in Corvettes; Insights From Sting-Ray Siblings”