After selling my long-loved, lowered, widened, tweaked and otherwise modified Infiniti FX 45, I was on the hunt for a new daily driver to supplement the big diesel Ford truck. With three boys and a looming midlife crisis, I felt the pull to a true sports car.  I started my list with the requirements of rear wheel drive and a manual transmission. With the FX only making it 16-18 miles on a gallon of premium fuel, I really wanted something with better fuel economy as well. And, of course, I had to stay within a tight budget!

Several friends have Miatas and I’ve long enjoyed watching Spec Miata racing. It’s not too difficult to envision a daily driver Miata built to mostly SM specs. A little lower louder and rougher than stock but, it seemed, the trade in performance was worth it. However, after looking at several and realizing the rough shape they were in when in my price range, I decided to move on.

Mustangs and C4/C5 Corvettes were considered, as were BMW 1 and 3 series. My brother tried to convince me to buy a Fiesta ST like his – while he loved his and logically it made sense, my heart wasn’t in it.

I happened to see a first generation (986) Porsche Boxster on Craigslist in my price range – fewer miles than the Miatas I had considered, but several years older. Higher maintenance costs and the potential for catastrophic engine failure due to the intermediate shaft bearing (well documented in the enthusiast world) have been keeping prices of these cars reasonable. However, in researching parts costs, I found they were not much higher than my FX was, and it appeared the mid-engine wasn’t too hard to access for general maintenance (both have proven true). 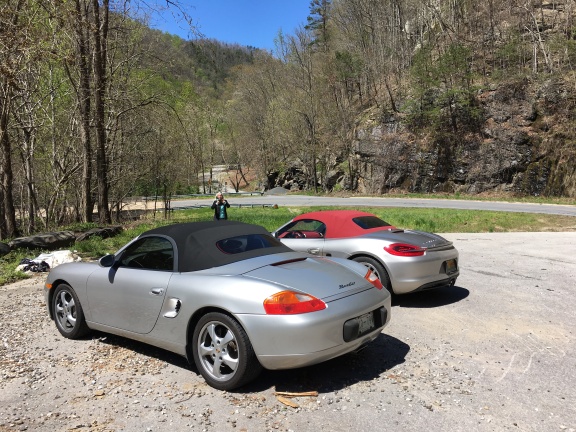 My wife talked me into driving the one on Craigslist. That’s all it took for me to narrow my list down to a Boxster. I haven’t driven anything that compares in raw feel to the 986. After driving and considering many others, I ended up buying the first one I looked at. My old man was a bad influence on the purchase, encouraging me by making the correlation that he has a newer Boxster he is passionate about while we have several friends and relatives who have owned Miatas for short periods of time before selling them to move on to something larger. Having driven dad’s Boxster many times and tending to prefer it over Ferraris, Bentleys, and Jaguars, I knew the Boxster was a car that I would enjoy driving every day that was truly “Different”.

Every time I start it, I am struck by the uniqueness of the key being on the left side. When I’m driving it, I always have a smile on my face. The direct feel of the steering transmitting important details about the road through the steering wheel, the unique sound of the flat six engine directly behind my head, the push of the engine behind me and how that allows the car to pivot, rather than be pulled along with rear wheel drive, is exhilarating. Even with the maintenance concerns and realization that it’s not as cheap (or under warranty) as other cars I considered, it is truly unique. This feeling begins when I put the key in the ignition (yes, it’s old, it still has a key) on the left side of the steering wheel. Porsche started doing this to make it easier for racers to start the car when they jumped in. A tradition that has carried on since the beginning, and another reminder this car, while not practical from a logical standpoint, is truly something special.

This is what I was looking for. While it doesn’t get the 30+ miles per gallon I was hoping for, I came to the realization that nothing which would make me happy was going to fill that requirement the way that I drive. After all, having a car that is truly a unique sports car is what I was after.

Isn’t this what all Alpha Geaheads seek? Whether it be the impractical two seat Porsche, a new Mustang or practical four door Fiesta ST, the uniqueness and joy they bring is exhilarating. Then, as gearheads, we start to modify cars to make them “ours”. Lighter wheels, wider, stickier tires for better handling, stiffer springs for less body roll, bigger sway bars to keep tires planted, headers and exhaust to “improve” the sound or just a better radio and speakers so the daily commute is more enjoyable, we all want to make our vehicles better than they came from the factory.

As for me, I’ll be loving life with wind in my hair in an old Boxster hammering some of these twisty roads in central TN, listening to the intake roar, and exhaust popping, smelling the brakes getting hot and rubber burning while dreaming I’m racing at Laguna Seca, Spa, Nürburgring or Sebring. In a car that always reminds me how special it is solely by having the key on the wrong side!

Daddy of three crazy boys, married to a beautiful wife that supports my (expensive) loud cars, fast music and shiny motorcycles habits. Grew up with gasoline and diesel fuel running through my blood. Constantly looking for ways to improve processes or add lightness. View all posts by Bryan Shriver

One thought on “The Key Isn’t on the Right Side!!”