-Father and son bond while bringing an unusual Jaguar back to life.

“Dad, check this out!” I exclaimed, having stumbled across an advertisement for a derelict XK-140 OTS. But though it appeared as any other XK-140 in need of a restoration this particular advertisement told a different, and more exciting, story. Sometime in the distant past, a previous owner had substituted this Jag’s solid rear axle with the complete independent rear suspension from a Jag E-Type. Pictures hinted at other period, E-Type sourced modifications but the full details were unclear. Nevertheless, at 14 I was thoroughly smitten with the shape of the XK, and always in favor of performance modifications, especially when executed tastefully. Thankfully my dad shared these same passions. This, then, was just the thing.

My love of cars was inevitable really. It was in my blood. My younger years were haunted by the presence of a 1966 Corvette under a layer of dust in our barn in rural Virginia. My dad bought that car in the late 1970s but it was sidelined due to a careless mechanic years before, a collision in the shop resulting in minor but demoralizing front end damage. As I grew I maintained constant pressure on dad to resurrect the Corvette, and slowly but surely progress was made. By my middle school years the body damage remained but the Corvette on the road. By freshman year of high school the body was repaired and it was a nice driver. Sadly, (for me) the Corvette was destined to go on to my older brother, but working on cars together had been a great way to spend time with my dad, so we embarked on a search for the next project.

I had always loved the Jaguar XK, having discovered them in an older Jaguar book. As it turned out dad also had a memory of falling for an oxblood-red XK-140 as a boy in the 1950s. We looked at a few “normal” XK-120 and 140 roadsters but all seemed to be missing that extra something “special”.

Now an XK-140 with an independent rear suspension and disc brakes… that was special. Further research revealed this car also to be fitted with the 3.8l engine from a 1961 E-Type. Passion sparked, a deal was made, and the car delivered from St. Louis in early 2000. Upon delivery, the depth and comprehensiveness of this strange hybrid were revealed.

This car had been fitted with the following E-Type bits:

This, then was an XK body and frame that had been fully (and to the untrained eye, invisibly) merged with an E-Type. We were told this work was done in the early 1970s.

Today it’s difficult to imagine combining two grade-A collector cars into an oddball hot-rod sports car, but at the time both were 10-20 year old temperamental used cars. Knowing this combination couldn’t be done again today adds to the mystique.

So, we had a puzzle on our hands. Clearly this was too special a car for the trendy “resto-mod” treatment, but there was no opportunity for an original specification concours restoration. Instead we took a different direction, imagining our work as a continuation of the original builder. His details and plans had been lost to history, leaving us free to make our own story. Everything that had been done, we executed to the next level.

The engine was removed, crankshaft balanced, and internals upgraded. The head was sent out to Terry’s Jaguar in Illinois for a thorough rework including high performance cams, porting, polishing, and larger valves. Custom exhaust headers were commissioned from Hayward & Scott in England. Gear duty is carried out by a 5 speed topped with a Hurst shifter; one of a few clues that something is a bit different.
The suspension was rebuilt using the best performance components on the market at the time. Upgraded torsion bars, coil springs, sway bars and polyurethane bushings from Classic Jaguar in Texas, and adjustable Spax shocks all around. The standard E-Type disc brakes up front were replaced by four piston Wilwoods. 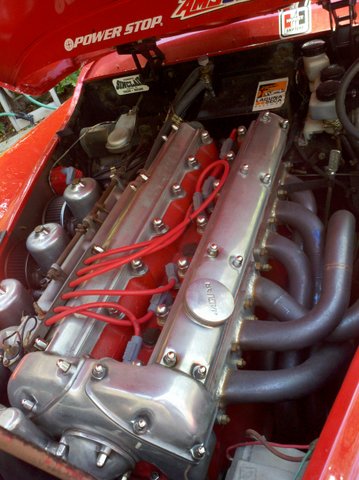 For the interior we wanted a purposeful but period correct look, and commissioned a set of period inspired racing seats, a custom “engine turned” gauge panel and otherwise standard XK-140 interior.

It all comes together very nicely, a well sorted XK that handles more like an E-Type and goes like a scalded cat. The casual observer would have few cues that it’s not a standard XK-140, while Jaguar enthusiasts can follow the details but still note that all major components are Jaguar sourced.

It’s no secret that I love this car. It’s been in the family for 17 years, and now in my garage for three, since my dad moved on to other projects.

But the reason this Jag will forever hold the distinction of being my favorite car has little to do with the car itself. It’s the memories, the thrill of finding the listing, the excitement when it was delivered, starting the engine after the rebuild. All this time, the car serving as a catalyst, bonding spirits of father and son.

The last item stands out as a distinct memory. Dad and I finally got everything ready to run around 3am on a Thursday morning. No exhaust past the headers was hooked up, and the hood (bonnet in the English parlance) had yet to be reinstalled, but celebration was in order. The refreshed engine unmuffled and uncovered, off we went to the only place open at that time, Wal-Mart, for some (very stale) doughnuts. To this day, we laugh about that experience.

Anyone who operates a classic car knows that restorations are never really complete; and today the car sits awaiting a carburetor rebuild (2 out of 3 done!), but more importantly my own children are now in queue, as they grow, to enjoy this intoxicating passion. Having my three year old ride with me a short ways, car seat and all, was a particular milestone. A great motivation to keep making new memories, and impart this, very special, Jag a history spanning three generations as a glue between father and son. 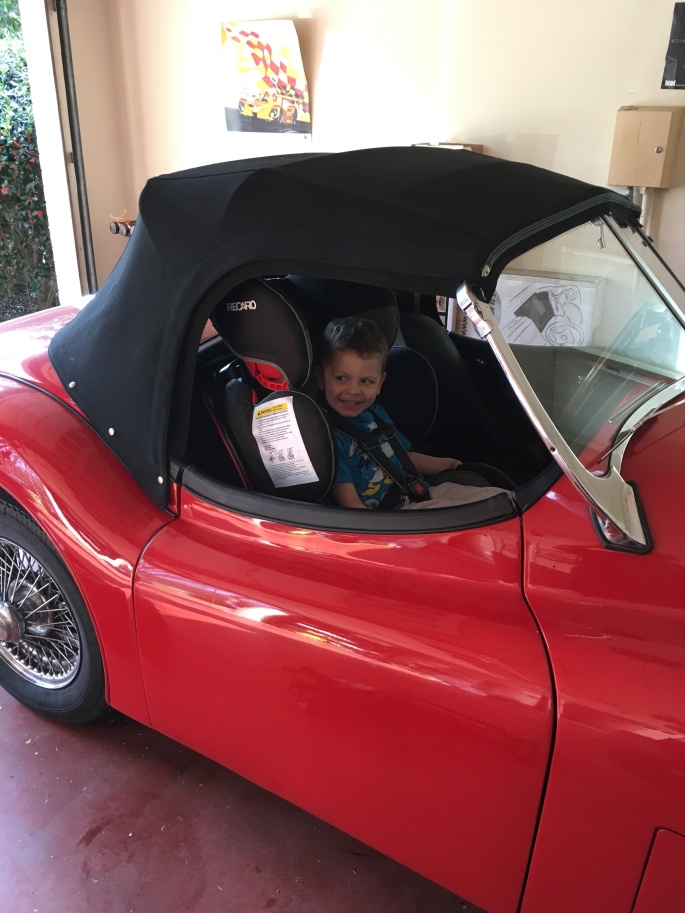